The day came and went far too quickly! It felt as though I had spent forever in preparation, only to have it fly by in an instant. My trip at the Texas Renaissance Festival finally happened!

The night before, I downloaded the app. TRF has an app! You can look up where and what food options are available, map out the places you want to go, and even set up a schedule of what you want to see while you are there. I picked our top entertainment choices and set up the schedule. You can even have it alert you when the time for your event has come. I also marked "favorite" shoppes we would want to stop in while we were there. There were some issues finding the places we wanted to be at. Thankfully, they have maps hanging at the bathrooms and plenty of cast members that are willing to give directions.You can also purchase a souvenir guide that will include a map and information on everything they have there. Even after leaving, the app sends traffic alerts for those coming and going. One such alert let you know what other highway to take to avoid long traffic lines. The app also lets you know what events are better geared towards kids.

Prep before you go!

Then came having everything laid out. I was going to be getting up at 5 AM and waking the kids at 5:20. The plan was to leave by 5:45 to get there in time for the opening ceremony. Talk about being down to the wire! My husband had to work the night before, so we had to plan it all out in minute detail. Which brings me to another part in planning that I didn't consider. If you want a hotel for any of these weekends, don't wait until the week of to book. THEY WERE ALL FULL! So we were definitely driving back home after the event. Which was actually for the best. My husband was going to be too tired for too long a day. If we had gotten a hotel, he would've wanted a nap in the early afternoon and come back for a couple more hours before calling it a day. So it worked out. But, if you were really wanting to stay close or make it a longer trip, book in advanced. WAY advanced! I had the diaper bag packed to the brim. I had waters for everyone in the fridge. Since each person is only allowed to bring in 1 unopened water bottle, I had these in the fridge. I got out our amazing cooler, that I have mentioned before in a review, and threw more waters in the freezer. Plan was to have them in the cooler in the van so that when we went out, they would be waiting and thawed enough to start drinking. I also set out breakfast. We are not big on eating that early in the morning. So I grabbed snacks that will be easy to eat when we are ready. Not the healthiest, but for something like this - worth it. I packed each of the older kids a snack bag. They can share, trade, and snack on the variety I gave them to and from the event. And everything in the bag would be fine in the car while we were inside the TRF.

We didn't leave right when we planned to. Despite waking the kids earlier than I thought I would, they were slow in getting dressed. 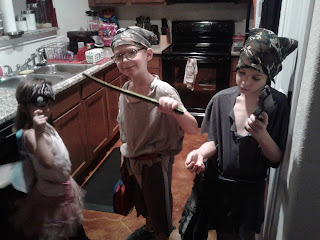 So we left a little after 6. And the drive there was mostly in thick fog. 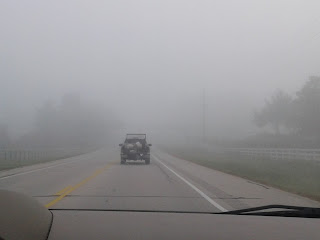 Soooo we got there about 9:20. Missed the opening and cannon fire. But as you will hear in my interview with someone at the Festival, the fog gives a certain mystery and hypes you up as you come in. The Texas Renaissance Festival has a magical feel about it. You are basically going back in time to a village of the Renaissance.

After checking in and getting our passes, I did a quick interview with Travis Bryant. This guy gets the word out about an amazing experience you can have at the Texas Renaissance Festival only. It was great meeting him and working with him to make our trip possible. I apologize ahead of time, the video was broken into two.

Going through the gate, the guys all got kissed by the pirate wench. Lucky for her, my attention was elsewhere... 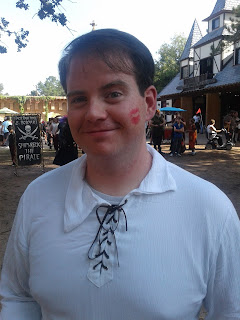 Once we parted ways, we checked out our first show - Birds of Prey. This was a wonderfully, engaging show. Educational as well. 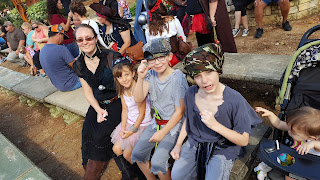 They had vultures, hawks, and owls that flew among the guests, did tricks, and showed us what they are really capable of. Our whole family enjoyed the sight. 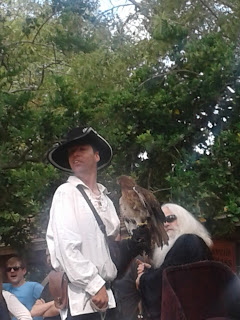 There were a couple moments when the birds showed who really ruled the roost by not obeying their trainers commands.

" />
After the show, my kids were crying for food. My little vultures... So we went hunting. Oh the smells! I can't tell you how badly I wanted to order lots of things. They had foods from all over the world. We requested 2 orders of potatoes - these were potato slices, fried to a crisp. Delicious! No one should ever be without their famous turkey legs. 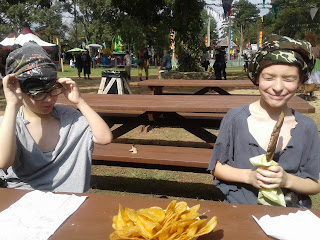 My oldest said he didn't want that, so we compromised. We bought 1 turkey leg and 1 steak on a stick. 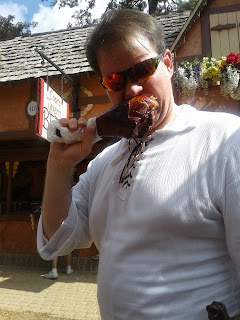 It didn't seem like enough, so I told them to endure a little more fun and we would eat again. (It was just soooo good!)
We went to see the Pirates of the Pride of Bedlam next. Talk about a rockin' good show! We were all enjoying their rowdy tunes.

" />
Even our baby pirate was happy. We had some random pirates hand out gold doubloons to the kiddos and some shoppe owners were giving away free Frankincense and Myrrh. My son got a piece of a bismuth crystal. For those of you who aren't familiar, it is a fragile metal crystal that is grown.
We saw many fascinating characters. My younger son loved this one: 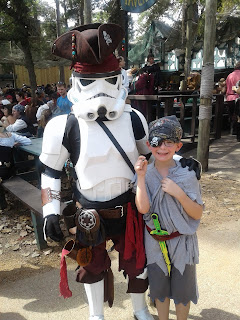 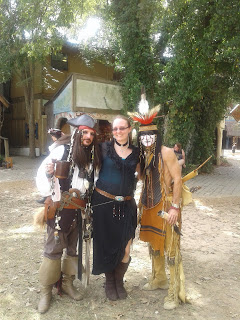 They had a parade and a version of a haunted house you could walk through. The haunted house was an additional fee. The family-friendly version was a 3D show. 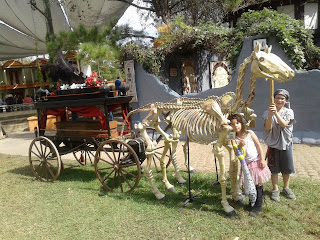 We finished our day with an interview with the Captain and his First Mate of the Pirates of the Pride of Bedlam. 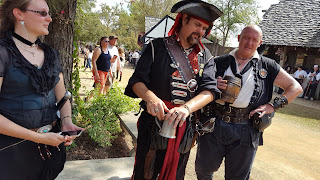 I'm sorry if you are unable to hear much, as it was at a very noisy time in the area.

" />He is very lively, very friendly and offered some great insight to the Texas Renaissance Festival.
We missed the Joust and the fireworks this time. But I do hope that a future trip may afford these wondrous sights as I'm told they are truly magnificent. 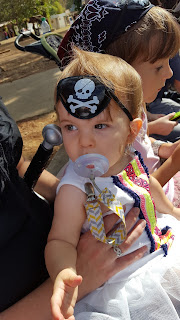 Also, both interviews led me to believe that Arsene is someone you positively MUST see at least once while you are there. I hope you got to enjoy the sights through my experience, but that you are planning your own trip in the future. If you are here in Texas, they have many weekends yet. We suggest you plan to bring shopping coinage. The artisans here do a splendid job with handcrafting just about anything your heart could desire. My sons are now proud owners of a hearty double-sided wooden axe.

What did you find most fascinating? 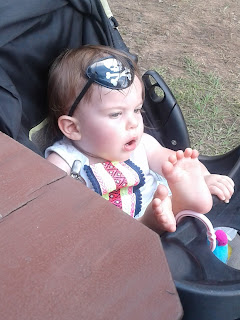 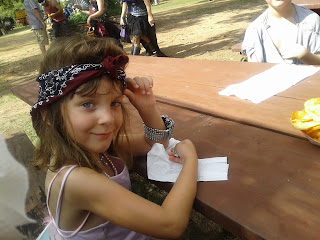 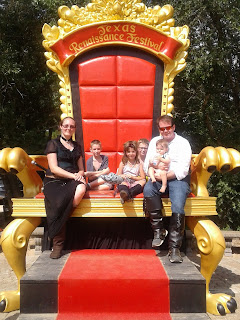 Leave a Comment
submit a review Join our blog team

Proud Member of The US Family Guide Network